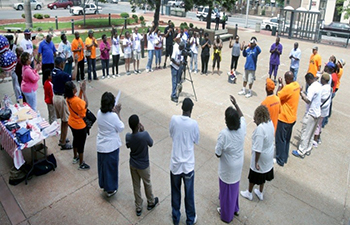 Guarding the Gates of the City Through Prayer initiative is and outreach arm of Igniting The Fire Prayer ministry birthed in 2008 as God’s 21st Century agents, to war and intercede on behalf of the city, state and national Gates through prayer.

In 2012, prayer was extended to include governmental leaders and walks on strategic sites within our city. Guarding The City and County Gates Through Prayer is designed to promote a culture of prayer and bring prayer to the forefront by igniting, motivating, mobilizing and activating ordinary people from all godly faith in Christ Jesus to pray for local governmental leaders, staffs, co-workers, family, friends, neighbors and all citizens, as we bridge gaps, bring unity and change the spiritual climate over our cities, states and nations as we invite God into our everyday affairs. We should pray for all authorities includes government officials (globally, international, national, and local) and pastors, church elders, school boards, school principals, employers, businesses, art and entertainment and  media.

We patrol and station ourselves to watch and obstruct demonic infiltration, reverse the assault of the enemy, unlock and remove obstacles that hinder Gods plans and purpose from being manifested in the earth realm.

Prayer Declarations for Cities and Our Nation

Decree for a Healthy Marriage

Your Due Season Will Come

Heaven for a Prepared People